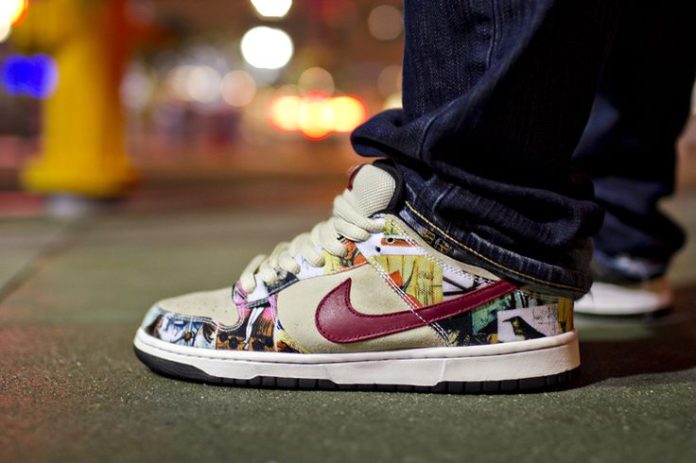 There was a time when sneakers were just sports shoes, which it is customary to wear out to holes and then immediately throw away. There were no special releases and collaborations, queues for limited releases, as well as those fabulous resale prices that we see now.

Everything changed with the arrival of Nike on the market in 1971, which turned the sneaker industry upside down and made them part of world pop culture and even art.

Today, the demand for rare sneakers is enormous. Collectors are ready to give a lot of money, and sellers, accordingly, do not mind making money on it. The resale market is growing and has already reached several billion US dollars.

We offer you the ten most expensive Nike sneakers in the history of the American brand. It is those models that have increased in price over time, although initially they were not so expensive.

The sneakers were released as part of the 2004 White City Dunk series in limited quantities. A total of 202 pairs entered the market, which quickly dispersed among the sneakerheads of London. The release, decorated in gray shades suitable for this city, was sold exclusively there. To date, the price of rare sneakers starts at $ 5,200.

In 2009, Hong Kong-based label CLOT and Nike released a special limited edition in honor of the Chinese New Year. The sneakers were made in a bright color with a pattern similar to silk-screen printing and packed in a corresponding lacquered box, which symbolized New Year’s sweets. Plus there were additional compartments for accessories.

This is one of the earliest SB Dunk, which came out in 2002. At that time, the Nike SB division was just beginning to gain momentum and attracted famous skateboarders to promote the line in order to develop unique collabs together with them. Reese Forbes was one of those who first received his own unique Dunks in denim style. Only 444 pairs were released at an initial price of only $65. Today, the price tag is almost 100 times higher than this amount.

After Kanye West announced his brand’s collaboration with adidas, it was unclear whether Yeezy 2 Red October would be released. Everything turned out differently — this release was released together with Nike. Even at the early stage of resale, the prices of sneakers were high, and today they have risen to several thousand US dollars. This is probably the most famous and expensive relic of all YEEZY.

This is the second collaboration between Nike and CONCEPTS – the first were Dunk Low Blue Lobster, which are also included in the pantheon of the rarest sneakers. This issue was released in a total of 36 pairs and was distributed to people who worked on the release. Finding sneakers today, even at this price, is very difficult, even impossible.

One of the most expensive Nike sneakers is Mag Back To The Future, released in 2011 for charitable purposes. All proceeds went to the Parkinson’s Disease Foundation, Michael J. Fox, who played the character of Marty McFly. For the first time these sneakers were lit up in 1989 in the movie “Back to the Future 2”. A few decades after the release of the film, the fans’ dream of self-lacing sneakers came true in Nike Adapt.

The pair was released in honor of the character of Freddy Krueger from the cult film “A Nightmare on Elm Street”. Nike released the sneakers to the market, but for some reason could not immediately resolve the copyright dispute on the epic with New Line Cinema. The company had to recall the batch and completely destroy it. However, a very small number of sneakers still managed to sell. This makes the model one of the most expensive Nike on the market.

Sneakers were released in 2005 together with streetwear designer Jeff Staple in the amount of 150 pairs. A lot of people gathered near Nike stores in New York at that time, but obviously not everyone had enough. From this, riots began with the involvement of the police. It is very difficult to find a pair in its original form today, and the price reaches a five-digit number.

Five years after the release of the first batch in 2011, Nike repeated the once sensational release. Now the sneakers have been equipped with an auto-lacing function, completely in accordance with the prototype from the movie “Back to the Future 2”. The party consisted of 89 couples and was even more exclusive. This has affected the cost of sneakers today, although the original price was $ 1,500.

To date, this is the rarest release and the most expensive Nikes available for resale. The sneakers were released as part of the White Dunk: Evolution of an Icon event in Paris with a circulation of 202 copies. The design of these Nike SB is made by French artist Bernard Buffett. The maximum price for which the sneakers were sold is more than $ 50,000. Now the resale price has dropped slightly.