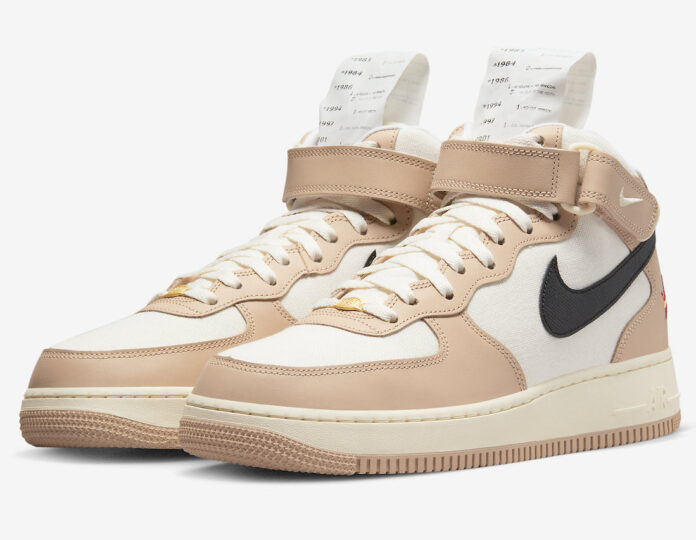 Nike has prepared a whole collection of sneakers for the 40th anniversary of the legendary Air Force 1 model. Among them will be a special model of Air Force 1 Mid, which recalls the history of the AF-1.

This version of the Forces with an average height of the upper offers a beige, almost white upper base made of dense canvas, which is combined with beige leather overlays, black leather Swoosh on the side, milk midsole and beige sole.

The trick in this pair is its tongue with a special insert on top in the style of a long check or a timeline on which key dates from the history of the Air Force 1 silhouette are plotted. For example, you can find the date of the creation of the design, the release of the Mid version, rebranding, and so on. We will also note the anniversary golden insert-a lace-up dubre, an embroidered star-swoosh, cartoon characters in honor of the city of Beaverton, the birthplace of the model, as well as Vietnam, where sneakers are made. A strip of cork is also used in the back. Below you can find the official detailed photos of the model.

Nike Air Force 1 Mid “Timeline” will be released in the next few months on the website Nike.com. The cost of this anniversary model is not specified yet — stay in touch and subscribe to us on social networks.