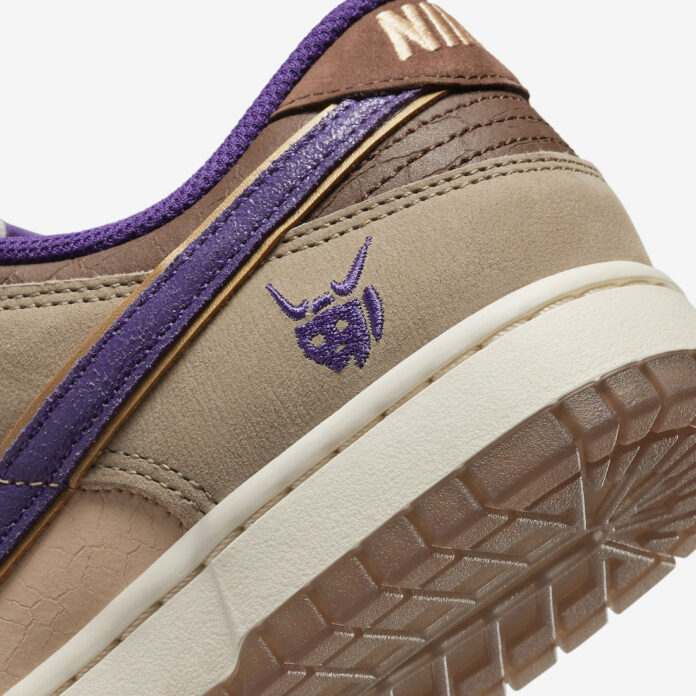 The annual Japanese Setsubun festival inspired Nike to create a sneaker collection of the same name, which will include not only Dunk High Up “Setsubun”, but also a low version of Dunk Low.

The Setsubun festival, also known as the bean throwing Festival, is celebrated the day before the beginning of spring according to the old calendar in Japan. During the Festival, it is customary to throw handfuls of dried soybeans to scare away demons and greet the seven Japanese Gods of Luck.

This Nike Dunk Low offer has a light brown “cracked” leather base combined with overlays of dark brown and khaki colors. Purple contrasting accents in the form of a Swoosh checkmark, lining and an embroidered image of a “demon” on the side. The design is completed with a classic white midsole over a brown semi-transparent sole and a print on the insoles in the form of an image of the end of the Edo period (1840s) by Utagawa Kuniyoshi under the name “─のの節分”. It depicts a bean-throwing child hero known as Kintaro, who will grow up to become a mighty warrior Sakata Kintoki, one of the servants of the famous demon fighter Minamoto Yerimitsu (Raiko). According to assumptions, the cracked leather on the sneakers will hide a different print.

This version of the Nike Dunk Low “Setsubun” will probably be released exclusively for Japan. The Setsubun holiday falls this year on February 3, so the release should take place soon. Stay tuned.

How to remove the smell from sneakers? 5 useful tips