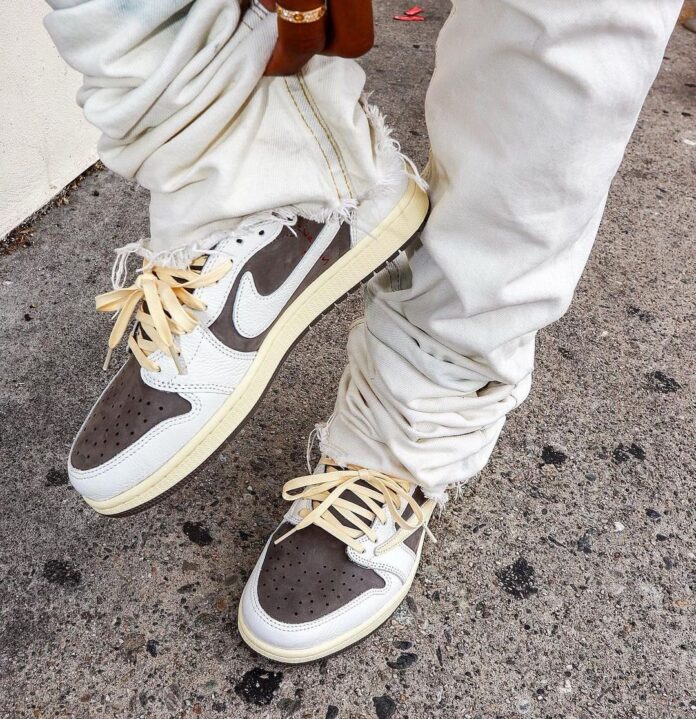 Travis Scott, it seems, is not going to end his collaboration with the Jordan Brand and its classic silhouettes. The rapper, along with Kylie Jenner, as well as daughter Stormy, recently got into the lens of paparazzi. Just on the feet of the latter, a sample of the not yet released Air Jordan 1 Low “Reverse Mocha” sneakers was noticed.

According to the published photos, it can be seen that Travis Scott x Air Jordan 1 Low “Reverse Mocha” will offer another coloring of low Jordans (apparently, both low and high options are waiting for us) with a mix of brown and white shades. The brown nubuck base of the top is combined with pure white leather overlays. From the side we see the traditional inverted Swoosh for Travis — in this case it is a light yellow shade. The design is complemented by Nike branding, a light, as if aged midsole and brown outsole. In the back, apparently, we will see Travis’ Cactus Jack logo.

It is not very clear when to expect Travis Scott x Air Jordan 1 Low “Reverse Mocha”. We are waiting for new photos and details. Stay in touch and subscribe to us on social networks.

Travis Scott x Air Jordan 1 Low in two colorways will be released in early 2022 in selected stores and on the website Nike.com in the SNKRS section. Stay in touch.

UPDATE 24.12.21. New photos of the upcoming Travis Scott x Air Jordan 1 Low “Reverse Mocha” have appeared on the web. This time from @yankeekicks in his favorite “on feet” format.

Nike Dunk Low will get an all-pink version “Triple Pink”