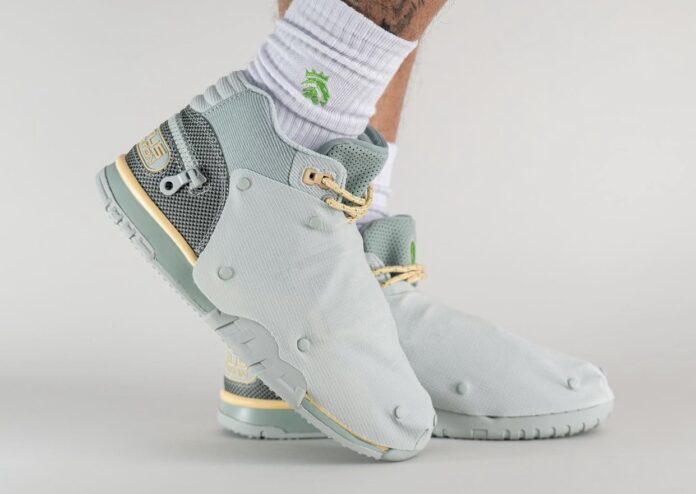 Travis Scott was spotted in a rather unusual silhouette for himself, the future Travis Scott x Nike Air Trainer 1 Mid collaboration. There are new layouts and more detailed information and life photos about the Air Trainer 1 model, which is expected in several versions from the Houston rapper at once.

It is reported that the Travis Scott x Nike Air Trainer 1 collaboration will be released in several colorway, include Coriander/Ashen Slate-Wheat-Light Sienna, Light Smoke Grey/Honeydew-Particle Grey and Dark Smoke Grey/Black-Iron Grey-Off-Noir. Each pair of sneakers will receive a recognizable Travis branding, including an inverted “swoosh” and the Cactus Jack logo on the backdrop. The sneakers will also be supplied with a special removable cover. Check out the photos below.

Travis Scott x Nike Air Trainer 1 will not be released immediately in a trio format, but in turn. The first colorway will appear in the spring 2022, and the pairs “Light Smoke Grey” and “Dark Smoke Grey” will appear later. The official retail price of each will be $140.

UPDATE 21.03.22. @yankeekicks once again shared life photos of the future Travis Scott x Nike Air Trailer 1 collaboration, but in the “Grey Haze” colorway. In the photos, all the details of the sneakers are clearly visible, including the protective cover.

UPDATE 21.03.22. @yankeekicks posted on-feet photos of the future Travis Scott x Nike Air Trailer 1 in the “Wheat” coloraway. There is no information about the release date of this collaboration yet. Stay in touch.