Homeadidasadidas Boost: from the creation of technology to modernity
adidas

adidas Boost: from the creation of technology to modernity 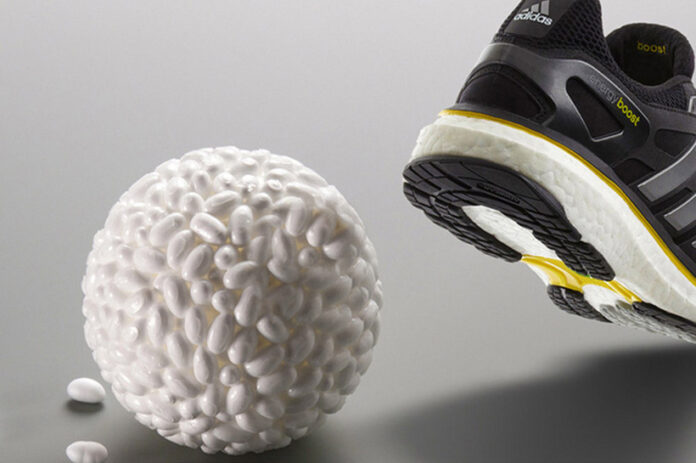 Since its foundation in the 40s, adidas has achieved world leadership in the production of sportswear and sneakers. The brand boasts many timeless iconic products, such as Superstar, Stan Smith and Rod Laver, which became innovative in the 70s and 80s.

In the 90s, Nike Air technology took a dominant position, and many manufacturers struggled to compete with this cutting-edge innovation from the Americans. The Air Max and Air Jordan models with their ingenious air-oriented midsole gained rapid popularity.

With that said, adidas eventually gave their answer too. Although the German brand was considered late in this regard, it showed its face and changed the rules of the game in a monumental way. This breakthrough was the Boost technology.

Science at the heart of technology

adidas, together with BASF, the world’s leading chemical company, have developed an ambitious system that has once again returned the brand to leadership in the field of sneakers. Thanks to science, the solid granular material known as TPU has been transformed into miniature energy capsules, dubbed Boost.

Boost technology is believed to provide the highest energy return compared to any other models currently on the market. The system has passed countless temperature sensitivity tests, and the development team has concluded that Boost foam is three times more heat-resistant than standard EVA material.

The debut of the innovative technology took place in 2013 at the Energy Boost exhibition, where the elastic upper made of polyurethane Techfit was also shown, which became a star along with the experimental midsole. From that moment, rapid progress followed, and adidas began to gain momentum.

The Pure Boost line caused a lot of responses from those who were looking for a real “hybrid engine” that helps to achieve athletic results and just get high in everyday life. Kanye West was connected to the promotion of the new technology, and thus the ground was prepared for the presentation of Ultra Boost.

Ultra Boost launched in 2015, introducing crosses with a full-size Boost midsole and a Primeknit upper. Some called them the best sneakers in the world, while others called them the most stylish silhouette with features much better than most competitors.

adidas Boost as a lifestyle

In 2014, the Crazylight Boost and D Rose 5 Boost were introduced, offering unprecedented cushioning and energetic rebound, which eventually found application in many silhouettes. With such NBA stars as Derrick Rose, Damian Lillard and Andrew Wiggins, the popularity of Boost technology has increased many times.

However, it was the NMD silhouette that became a real classic. An impeccable creation that harmoniously combines style and content, designers and brands from all over the world took turns offering their own artistic performances of these sneakers. Partly thanks to such creatives as Pharrell Williams, Kanye West, BAPE and KITH, the NMD model continued its upward trajectory, gaining the status of a streetwear silhouette.

Cooperation with the White Mountaineering brand brought adidas a whole army of exquisite models, some of which were presented on the catwalks of Paris. Japanese design master Yoji Yamamoto appreciated the microcapsule system and applied “boost” in his fashionable Y-3 sneakers.

In a relatively short period of time, adidas Boost technology has crossed many sports, styles and influences on the way to its formation. Boost sneakers have revolutionized the industry, continuing their dominance in the world of kickers. adidas continues to create eclectic colors and new interesting silhouettes from the Boost and Ultra Boost series and improve its technology.