Steve Jobs and the New Balance sneakers associated with him 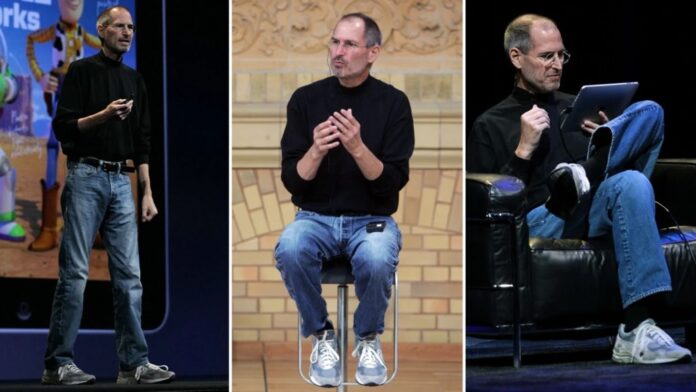 When Steve Jobs first introduced the iPhone at Macworld in San Francisco in January 2007, he forever changed the idea of what a smartphone should be. It was the most technologically advanced mobile communication device that Silicon Valley could imagine at that time.

During the presentation of the first iPhone, all those present were absorbed in the action taking place on the stage and listened only to the device itself. Few people paid attention to what Steve Jobs was wearing, let alone his shoes. Only real sneakerheads immediately noticed that the maestro was wearing New Balance sneakers.

In the future, introducing all the next generations of the iPhone, Steve Jobs wore exclusively New Balance. And this is not an advertising campaign ordered by an American manufacturer from Apple, but a choice towards really comfortable and practical sneakers. However, it was also a friendly gesture of Jobs to his longtime friend and owner of New Balance, Jim Davis.

Legend has it that the design of the New Balance 992 was approved by Steve Jobs himself. True or not, history is silent, but the founder of Apple really liked the brand’s sneakers, so it is readily believed. The model was released in 2006, and it was strange to see Jobs during the presentation of the iPhone 2007 not in them, but in the previous generation New Balance 991, which came out back in 2001.

Many joked that the New Balance 992 was lying in Jobs’ closet between Puma and Reebok, waiting for an opportunity. In the same 2007, sneakers were still noticed on the creator of Apple.

In general, the 99x series has been unofficially produced since 1982, starting with the New Balance 990 — the first sneakers in history with a price tag of $100 ($273 in 2020 money). Today it does not seem too high a price, given the current collaborations and special editions for much more money, but then, at the dawn of the development of the industry as a whole, it was unheard of expensive.

People who are far from the topic of sneakers may not notice the difference between New Balance 991 and 992. Sneakers are almost identical in design. The new generation has undergone some changes, becoming at one time one of the most expensive and at the same time comfortable sneakers on the market.

For the first time in New Balance 992, the shock-absorbing material ABZORB SBS was used in the heel and forefoot, and a shock-absorbing insole was also used. Walking in shoes was much more comfortable thanks to the improved feedback effect. And Steve Jobs really liked the new model.

New Balance 992 was released in honor of the centenary of the brand in 2006 and was delivered until 2010. For all the time, sneakers have been sold in the amount of more than one million pairs, which is not surprising, given Steve’s PR. During all iPhone presentations, with the exception of the first one, he wore only 992. The model returned in 2020, becoming a hit despite its high price.

Anyone interested in purchasing Steve Jobs New Balance 992 (2020) sneakers should know that these sneakers are different from the classics. The developers have made minor changes. In the original, ABZORB technology was used, and in the new version, an ortholite sole was used. This slightly softened walking thanks to the polyurethane of lower rigidity. The pattern on the outsole has also been changed, but otherwise we have the same classic 992.

Sales of new items do not break records, but crosses are being sold quite actively. People still remember the minimalist style of Steve Jobs, who died in 2011, and his annual iPhone presentations in his favorite sneakers.

New Balance 2002R will be released in the “Grape Leaf” colorway